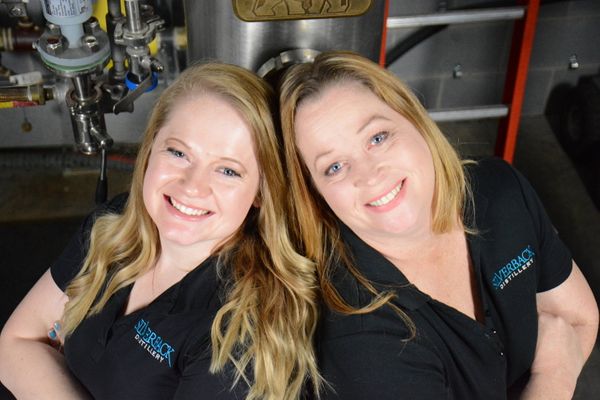 After just one sip of their award winning spirits you'll be thumping on your chest like a Silverback gorilla!!

Silverback Distillery is, without any doubts, one of the most top notched and just down right awesome places on this planet! Nestled in the foothills of the Blue Ridge Mountains and with the tastiest spirits around, once you're here you'll never want to leave. Owned and operated by a fascinating mother/daughter duo, with some of the friendliest and knowledgeable staff around are just a couple reasons Silverback Distillery stands out above the rest. Another reason they stand out is this: When the pandemic started and everyone was running out of hand sanitizer, the crew at Silverback Distillery quickly switched gears and began to make hand sanitizer for first responders and medical personnel, for FREE! They were the first distillery in Virginia to do this and although other distilleries followed suit, they were the original trailblazers and they did it out of the kindness of their hearts, as their way to help in this uneasy and uncertain time.

Christine Riggleman (@HoochMamaDistiller) is the CEO and Master Distiller of Silverback Distillery. Born and raised in Manassas, Virginia, Christine married her high school sweetheart, Denver, at the age of 19. Shortly after, Denver joined the Air Force and their journey across the United States and far-off lands began. Christine earned a scholarship from Le Cordon Bleu Culinary School in 2000 but due to her husband's military career, she turned down the offer. Christine’s passion for culinary delights never wavered and eventually veered into the world of extraordinary spirits. She became fascinated with distilling on a tour of Ben Nevis Distillery in Scotland in 2012, and shortly after began researching distillation and maturation processes with Denver. In 2014, after a year and a half of strenuous planning, research and construction, Silverback Distillery opened its doors. Although Silverback has only been open since August of 2014, Christine’s spirits have racked up accolades, earning 16 international awards among numerous local and statewide awards. In 2014, she was named one of the top gin distillers in the United States through MSN.com, and in 2017 became the first person inducted into the ABV Network's Bourbon Hall of Fame.

Denver is co-owner of Silverback Distillery, husband to the indomitable Christine Riggleman and father to an extraordinary trio of daughters. Despite rumors to the contrary, Denver has never been an exotic dancer or movie star. His occupations over the last twenty years include: USAF avionics technician, commissioned USAF Intelligence Officer and co-founder, former CEO of a successful federal contracting company. Denver has been a huge advocate for small business rights, and that started his involvement in politics. He is now a congressman for the 5th district of the great state of Virginia. Denver's most important Silverback responsibility is being the world's preeminent "taste-tester" for all Silverback products. Denver is also an aspiring author and space traveler.

Lauren Riggleman (@BabyHooch) is the Assistant Distiller & General Manager for Silverback Distillery. A second generation distiller, Lauren received her undergraduate degree from the University of Virginia in 2015. In 2017, she received her Master's Degree in Fermentation Sciences: Brewing and Distilling from Heriot-Watt University in Edinburgh, Scotland. While spending a year in Scotland, Lauren became a member of the Institute of Brewing and Distilling and spent time researching the similarities and differences between Scottish and American distilling and brewing practices. Lauren loves to get involved with all things whiskey on social media, and has appeared on the ABV Network's podcast The Bourbon Daily a number of times. She joined her mother in the ABV Network’s Hall of Fame as the 39th inductee. Lauren is also teaching the first ever General Certificate in Distilling Course starting at Piedmont Virginia Community College in Charlottesville. Lauren currently resides in Massanutten, Virginia with her husband, Brant, and their three dogs.

Abby Riggleman (too cool for nicknames)

Abby (@abbyriggles) is the Media Director and General Manager for Silverback's Pennsylvania location. Being the middle child of Denver & Christine, she has always been fiercely driven to travel and explore the world. After studying media arts and design at James Madison University, she and her husband, Daniel (Danny), made the journey to Scotland so she could complete her Masters in Film Directing at the University of Edinburgh. Abby is now responsible for Silverback's media and works on her own documentaries on the side. She also sells custom whiskey scented soy candles, Absolute Scents, that you can find at the distillery. The candles smell wonderful but are not safe to drink.

Lilly is the youngest of the Riggleman daughters, and recently completed her B.S in Integrated Science and Technology at James Madison University. She is using her background of energy systems and information knowledge management as our new Data Manager. Her interests include her puppy Artemis, kayaking, and whiskey!

Brad is the Operations Manager and one of the distillers for Silverback Distillery. He loves his job but hates pictures. Brad came on board near the birth of Silverback in 2014. His day-to-day tasks include all facets of production/management and relentlessly bothering Lauren (not enough hours in the day to do the latter job properly). Some of Brad's favorite hobbies include telling unsuspecting people not to step or drive on the grass and gratuitously indulging in Pepsi and candy consumption that would rival the likes of Willy Wonka himself. Lastly, Brad is the sole and four-time recipient of the Silverback Miss Congeniality Award. He is currently undergoing the process of being formally adopted by the Rigglemans.

Danny (@dannymcnew) is the Assistant Operations Manager at Silverback's Pennsylvania location and cinematographer for the robust two-person media department. Danny started with Silverback while attending James Madison University in 2014. He has worked in the tasting room and now assists in daily operations for the distillery including production, bottling and front room management. Danny is the key cinematographer for Silverback marketing videos. He currently works in the Pennsylvania location where you can find him and his "nugget" of a bride, Abby.

His past is shrouded by tall tales and soft-spoken rumors. Some say he emerged fully-formed from a dark wood in Afton, with a fifth of whiskey at his hip, and others say he was found abandoned in an ancient, time-worn fermenter, but most agree he developed his chipper demeanor, attention to detail, and interpersonal skills in Loudoun County, Virginia, among a loving family. Ryan’s title at Silverback Distillery is Assistant General Manager - Poconos, but he has a hand in everything from tasting room management, marketing and media, to distillation and packaging. Despite not being really, really, ridiculously good looking, nothing makes Ryan happier than a chance to act like a GQ model and practice his looks (Blue Steel is definitely not the same as Le Tigra), but sometimes he has to settle for rugby, building computers and reading poetry.

Emily (@emily_czerwik23) is our Tasting Room Manager and lead salesperson in Virginia and our resident “Goose”. She once saw a swamp horse, and encourages bad behavior in southern cities. Originally from Richmond, she made the great journey to the Blue Ridge and joined the Troop’s tasting room staff in June of 2018. She’s always thinking outside the barrel for new ways to improve customer experience, and cooking up tasty new cocktails. In January 2019, Emily took on a new challenge as a Silverback Sales Rep. Now splitting her time between the tasting room and sales, she’s making her way through Virginia and Washington D.C. one bottle of whiskey at a time, helping cultivate the Silverback spirit in bars and restaurants.

Silverback Distillery is the only mother-daughter distilling duo in the nation crafting high quality, award-winning spirits.

With production facilities and tasting rooms in both the Pocono region of Pennsylvania and in the Blue Ridge Mountains of Virginia, Silverback offers a unique visitor experience. From mini cocktail flights, barrel smoked cocktails, or whiskey served neat, however you fancy your tasting, our distillery offers a chest-thumping good time.

Why is the distillery named "Silverback"? Silverback is the nick-name given to Christine's husband, Denver, by their three wonderful, wise-ass daughters. His early graying hair, overprotective demeanor and generally grumpy attitude (although sprinkled with unbridled exuberance) contributed to the name.

The next time your in the area, stop in, say hello, enjoy some marvelous spirits and maybe even give 'em a "thank you" for all they do!